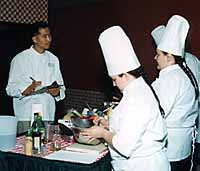 Cooking at the Greenbrier is a dream for many culinary artists, but that dream came true for several high school students when they competed in the First Annual Pro Start Culinary Competition. The competition, held March 8 and 9, at the Culinary Arts Center, in the former bunker at the Greenbrier Resort, is part of the West Virginia Department of Education’s Hospitality Education and Training Program. Pro-Start, a restaurant management and culinary program developed by the National Restaurant Association, has 40 programs throughout the state.

With limited equipment supplied by the event organizers, the teams were allowed to bring in their own utensils and other equipment. Student teams, who were judged on teamwork, safety and sanitation, presentation and, of course, taste, had one hour to prepare a mouth-watering gourmet menu that was planned in advance. 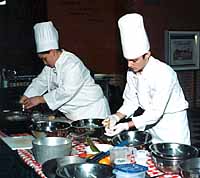 The Fayette County team also took home the Hospitality Cup, which will be awarded to future winning teams of the competition. Members of the first, second and third placed teams each received a medal and their schools received a golden plate to be displayed at the schools.

In May, the winning team will travel to Denver, Colorado to compete in the national competition with Pro Start teams from 18 other states.

Other teams who participated in the event were the Wood County Technical Center, Mason County Tech Center and John Marshall High School from Moundsville. 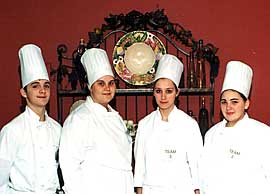 So no one left empty handed, all participants received a certificate of participation, as well as accommodations at the luxurious Greenbrier Resort, including dinner in the main dining room. The contestants also had the opportunity to tour the kitchens at the resort.