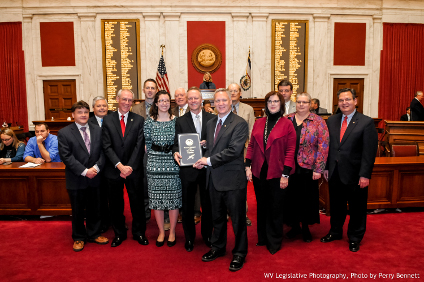 The citation states the Golden Horseshoe award is “probably the most coveted award bestowed upon West Virginia students each year” and notes the test has been administered since 1931, making it the longest-running program of its kind in any state.

"The Golden Horseshoe is a highly coveted award received by citizens from all walks of life including state Supreme Court justices, legislators, attorneys, business leaders and educators,” Martirano said. "I appreciate our lawmakers recognizing a program that has made West Virginians proud for decades.”

Known as a symbol of scholastic achievement to honor students who excel in the study of West Virginia, the Golden Horseshoe award is presented to approximately 221 eighth-grade students each year. Students are engaged in an intense study of history, geography, economy and government of the Mountain State. The primary goal of the program is to promote pride in the state, develop intellectual and participatory skills and foster attitudes that are necessary for students to participate as effective, involved and responsible citizens.

For additional information, contact Kristin Anderson at the West Virginia Department of Education Office of Communications at 304-558-2699 or Kristin.Anderson@k12.wv.us.