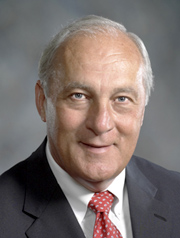 Charleston, W.Va. - A longtime member of the West Virginia Board of Education (WVBE) today attended his last meeting in that role. Robert Dunlevy has concluded a nine year term on the board.

"Bob's service to the students of West Virginia has been tremendous over the years," said WVBE President Gayle Manchin. "He consistently brought wisdom and a sense of fairness to his decisions as a board member. He will be greatly missed."

During his time on the state board, Dunlevy has served as board secretary and has been an active member of the West Virginia School Building Authority and the West Virginia Secondary Schools Activity Commission. A native of Ohio County, Dunlevy is a graduate of Warwood High School in Wheeling. He furthered his education by earning a Bachelor of Science in education from West Virginia University.

Before his state board appointment, Dunlevy had been a member of the Ohio County Board of Education since 1985 and served as its president from 2003 to 2005. His other community involvement includes serving as the board chairman of the Health Plan of the Upper Ohio Valley, a member of the Development Council for West Virginia University Athletic Club and a member of Wheeling Civic Center Board.

Mr. Dunlevy was a talented athlete who earned an athletic scholarship to play on WVU's football team in the position of tight end. He was a three-year letterman and, upon graduation, was a high draft pick by the Dallas Cowboys. Following a two-year career at Dallas, he played for the Wheeling Iron Man Continental Football League.

Mr. Dunlevy is married to wife, Connie, and has three sons, Rick, Ryan and Rob, who all live in Wheeling.

Its 12 members include nine citizens appointed by the governor and three non-voting ex-officio members — the state superintendent of schools, the chancellor of the West Virginia Higher Education Policy Commission, and the chancellor of Community and Technical College Education. Board members serve overlapping terms of nine years.

For more information, contact the West Virginia Department of Education at 304-558-2699.