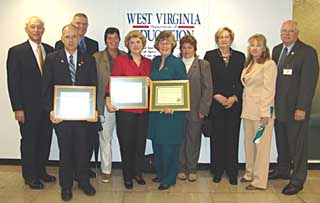 The three education programs each met all 78 education standards, an exceptional achievement. The achievement of CEA accreditation is a national recognition of the attainment of excellence in the operation of education programs in correctional institutions. The programs are accredited from July 1, 2004 to June 30, 2007.

The West Virginia Legislature recognized the importance of providing meaningful education programs to institutionalized juveniles and adults when it transferred the responsibility for education in institutions to the West Virginia Board of Education and State Superintendent of Schools more than a decade ago. Overwhelming evidence has been accumulated on national and state levels that links correctional education programs to dramatically reduced recidivism rates and crime prevention. A national study revealed that education is the most effective of all crime prevention programs and saves taxpayers millions of dollars in victim-related costs and the costs of re-incarceration and dependency. The relation between education and recidivism clearly makes having effective correctional education programs a public safety issue. For more information, contact Frank Andrews, Superintendent, Office of Institutional Education Programs, at (304) 558-8833/2240.