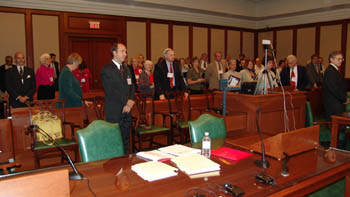 The event recognized the importance of civics and government curriculum, promoted an enlightened and responsible citizenry and recognized that effective education in civics is enriched by collaborative efforts involving local, state and national entities. This is the first step to identify and cultivate a West Virginia support network of individuals and organizations that have as part of their mission the promotion of civic education.

Earlier this year, the West Virginia Board of Education adopted a policy that now requires civic education and government for high school graduation. Students who enter the ninth grade this upcoming school year must meet these new requirements.

“With the new graduation requirement of civic education and government, this will lend a bigger boost of energy toward the subjects,” said State Schools Superintendent David Stewart.

Today’s conference included nationally known speaker on civic education Ted McConnell who serves as Director of the Campaign to Promote Civic Education. McConnell has been involved in the political, governmental and non-profit sectors for more than 25 years. He served on the staffs for the presidential campaigns of Presidents Gerald Ford, Ronald Reagan, and George H. W. Bush and has been involved with the management of more than 30 political campaigns nationwide.

McConnell believes that the sole opportunity most Americans have to develop the knowledge, skills and dispositions necessary for an engaged citizenship is during their school years.

State Board Member and State Facilitator of Civic Education Priscilla Haden attended the First Annual Congressional Conference for Representative Democracy in Washington, D.C. More than 300 participants from across the country attended the three-day event, which was an effort to bring about national awareness of civic education.

With the success of the national conference, West Virginia has joined 20 other states that have held or will hold over the next two months a conference of this type, organized by the state’s Congressional Conference Delegations. Thirty-nine state delegations have or are forming broadly inclusive coalitions of all education and civic engagement stakeholders to pursue a campaign to restore the civic mission of their state’s schools.