January 21, 2004
CHARLESTON, W.Va. - The West Virginia Board of Education and the Department of Education (WVDE) are cooking up a recipe that will give students’ the jumpstart they need each morning. Bringing healthier lifestyles into the classroom and ultimately into the home of every student is the goal for the CD-Rom, titled “Recipe for Success.”

“Recipe for Success” provides principals and other administrators innovative ideas that will lead students to healthier lifestyles which can continue into adulthood.

The West Virginia Board of Education and WVDE want to do their part in curving the obesity rate among West Virginia’s children. The obesity rate has come into the national spotlight recently when officials announced that 15 percent of youngsters between the ages of six and 19 were seriously overweight.

Seventh graders at John Adams Middle School got a sneak preview into what is detailed on the CD-Rom this morning. Students received a healthy breakfast and participated in activities with officials from the WVDE. 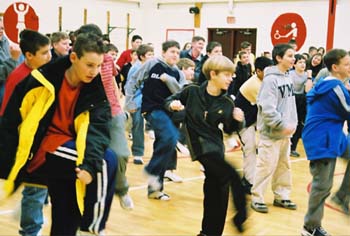 “When a student receives a healthy start each morning, their mind becomes more alert and ready to learn,” said State Schools Superintendent David Stewart. “We want all of our students to perform at the highest levels and the best way to do that is to teach them good nutrition and active lifestyles.”

The CD-Rom, produced through the WVDE’s Office of Child Nutrition and the Office of Student Services and Health Promotion, targets middle level education students. It will be distributed to principals over the course of the next few weeks.