January 15, 2004
CHARLESTON, W.Va. - The West Virginia Board of Education welcomed its newest members during its monthly meeting. Lowell Johnson and Burma Hatfield were sworn in on Thursday, January 15, in the State Board Room. 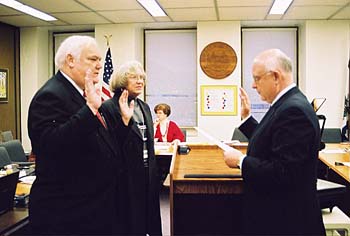 Johnson, a native of Greenbrier County, holds a bachelor’s degree in education from Concord College, a master’s in guidance and counseling, and a doctorate in reading and psychology from WVU. He taught in the public school system in Greenbrier County, was a professor at Fairmont State College for 11 years and taught at Bluefield State College, where he was chair of the Division of Education.

He was appointed to a term ending Nov. 4, 2012, and succeeds Howard Persinger Jr.

Hatfield is a resident of Mingo County. She received her bachelor’s degree in language arts, her master’s degree in education and a certification in administration from Marshall University. Hatfield was most recently the principal at Gilbert Middle School, a position she held for 21 years. Prior to that, she taught in the county school system for 15 years.

She was appointed to a term ending Nov. 4, 2011, and succeeds Lloyd Jackson.

“We are fortunate to have two individuals who have such a great depth of knowledge in education issues to serve on our State Board,” said State Schools Superintendent David Stewart. “Both Mr. Johnson and Ms. Hatfield will bring a great deal of expertise to the table.”