CHARLESTON, W.Va. – A team of students from Mineral County and a teacher from Jackson County are this year’s recipients of the Caperton Technology Awards. Former Governor Gaston Caperton announced the winners during the first day of the West Virginia Department of Education’s Summer Conference.

Established by Caperton to recognize and honor those who have made a difference through the use of technology in K-12 schools, the awards are given to a student or a team of students and a teacher/administrator, or a team of teachers/administrators. The recipients receive $5,000 from the grant award program established by Caperton and administered by the Greater Kanawha Valley Foundation.

Scott Adams, Jason Bell, Eric Nichols and Matthew Williams, a team of students from Keyser High School, Mineral County, were selected as the student recipients. These four students have been instrumental in implementing new technology in their school and sharing what they have learned with other schools in Mineral County and in their community. By sharing palm computer activities with students at Mineral County’s Math Field Day and Outdoor School, they hope to encourage younger students to study more mathematics, science and computer science.

These students volunteer many hours at the school providing technical support. They were also the first Keyser High School Robotics Team that competed in the Regional Botball Robotics Competition at Carnegie-Mellon University, National Robotics Engineering Consortium. 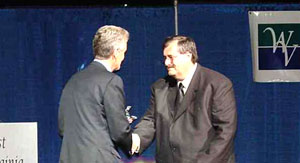 He has also taught Basic/Advanced Technology Standards for Teachers courses through the Edventure Group out of Morgantown. Further, he has prepared and presented several staff development session for Jackson County Schools, such as Problem Based Learning as taught through the INSTEP program through Wheeling Jesuit University in Wheeling.

As West Virginia’s 31st governor, Caperton helped develop one of the nation’s first most comprehensive approaches to include technology in the schools. His long-range initiative to place computers in every elementary classroom in the state and to provide educators with the appropriate training to successfully utilize the computers to enhance student achievement is still considered the country’s most successful learning technology program.

Caperton continues his commitment to education by serving as the president of The College Board, a national non-profit association whose mission is to prepare, inspire and connect students to college and opportunity. Among the College Boards best-known programs are the SAT, the PSAT/NMSQT and the Advanced Placement Program.