July 23, 2003
CHARLESTON, W.Va. - The West Virginia Department of Education (WVDE) kicked off its Summer Leadership Conference with State Schools Superintendent Dr. David Stewart’s Annual State of the Schools address. Dr. Stewart outlined the accomplishments of the past year and the challenges that lie ahead for the WVDE and public schools.

Noting one of the greatest accomplishments was the federal approval of West Virginia Achieves, the state’s No Child Left Behind plan. West Virginia was the ninth state in the nation to have its state’s plan approved. He made mention that high-stakes accountability for all students is here to stay. He also noted that school effectiveness research has proven that every child can be educated.

Stewart also highlighted several key policies that were approved by the West Virginia Board of Education. New graduation requirements and a uniform grading scale were approved earlier this year. Also approved were the Student and Employee Codes of Conduct. The State Board wants to ensure everyone that West Virginia schools are safe places to learn. 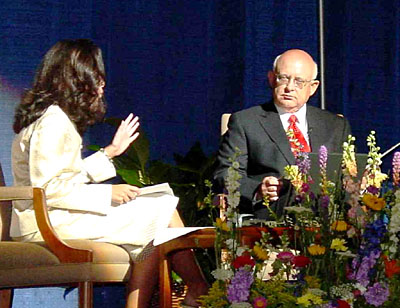 Student achievement is the cornerstone of the WVDE and the West Virginia Board of Education. Stewart noted that in 2002, West Virginia seniors scored the highest average in the last five years on the ACT with a composite score of 20.3. Average SAT math scores were also up in 2002.

Stewart reported that West Virginia has made tremendous strides in preparing its students for post-secondary education. He mentioned that the Mountain State has one of the highest high school graduation rates in the nation at 90 percent.

While the state has accomplished much, there are challenges that lie ahead of us. This year, all schools will be making the switch to the WESTEST statewide assessment. Other projects that are in the works include End of Course Test Development, WV Writing Assessment Rubric Redesign, as well as other items that will be in alignment with the state’s Content Standards and Objectives.

“We must meet the challenges that are ahead of us,” said Stewart. “There is no question that our stellar achievement would not have been possible without the assistance, cooperation, determination and dedication of our entire education community.”