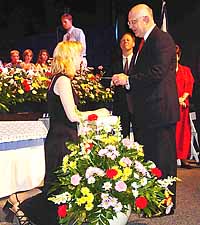 Two hundred twenty-one West Virginia eighth graders have been presented the prestigious Golden Horseshoe Award for outstanding performance on the test measuring students’ knowledge of the state’s history and culture.

The students were inducted as “knights” and “ladies” of the Golden Horseshoe Society by State Superintendent Dr. David Stewart and members of the West Virginia Board of Education during afternoon ceremonies at the West Virginia Cultural Center in Charleston. Governor Bob Wise was the guest speaker at the opening ceremony at 9:30 a.m.

The Golden Horseshoe award originated in the early 1700s in Virginia when then-Governor Alexander Spotswood saw the need for exploration of the land west of the Allegheny Mountains, most of which is now West Virginia.

The governor organized a party of about 50 men to explore the frontier. At the end of the exploration, he presented each member with a golden horseshoe with an inscription that read: “Thus it was decided to cross the mountains.” On the other side was written, “Order of the Golden Horseshoe.” Because of this, recipients of the award became known as “The Knights of the Golden Horseshoe.”

The Golden Horseshoe Test has been administered in West Virginia since 1931 and is the longest-running program of its kind in the nation. The two top-scoring students from each county are given the award, plus another 110 students are selected based on a county’s student population. Additionally, the top-scoring student from the West Virginia Schools for the Deaf and the Blind receives an award.