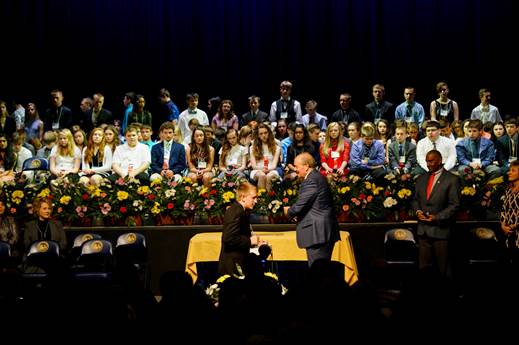 CHARLESTON, W.Va. – Today, eighth-graders from across the state received recognition as Knights of the Golden Horseshoe. Two hundred and eighteen students received the prestigious award for their outstanding knowledge of West Virginia history and culture.

“I am proud of each student who earned this elite honor today,” Paine said. “The Golden Horseshoe recognizes students’ appreciation and understanding of West Virginia and promotes pride in our state.”

Also in attendance at this year’s ceremony were Governor Justice’s Chief of Staff Nick Casey, Secretary of State Mac Warner, Secretary of the Department of Education and the Arts Gayle Manchin and State Board of Education member Miller Hall.

West Virginia has administered the Golden Horseshoe test each year since 1931 and is the longest running program of its kind in the United States. The top-scoring students in each county receive the prestigious award. Each county has at least two winners. The exam tests students’ knowledge on West Virginia citizenship, civics and government, economics, geography, history and current events.

This year marks the 301st anniversary of the Golden Horseshoe tradition, which began in the early 1700s in Virginia when then-Lieutenant Governor Alexander Spotswood saw the need for exploration of the land west of the Allegheny Mountains, most of which is now West Virginia. Spotswood organized a party of about 50 men to explore the frontier. At the end of the exploration, he presented each member of the party with a golden horseshoe. Translated from Latin, the inscription on each horseshoe read, “Thus he swears to cross the mountains.” On the other side was written, “Order of the Golden Horseshoe.” Because of this, the recipients became known as “The Knights and Ladies of the Golden Horseshoe.”