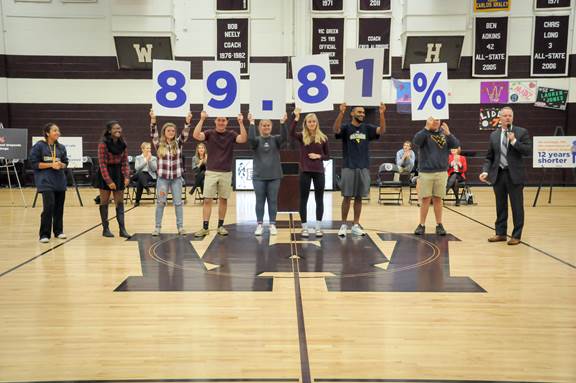 “Very few states can boast such a high graduation rate, making this a very proud moment for West Virginia,” said Gov. Earl Ray Tomblin. “We have worked hard to increase student success in the Mountain State through programs that give our students the inspiration, support and resources that help them reach the graduation stage. We owe this news to all the teachers, parents, administrators and staff who make education a priority, and most importantly to our students who are committed to their futures. West Virginia is strong when our young people have a strong educational background, and I look forward to seeing where this generation will take us.”

This news comes two years after the release of a five-year strategic plan which outlines a goal of improving the graduation rate annually, with an ultimate goal of 90 percent for all West Virginia students by 2020.

“No other metric is more important in validating our progress than our graduation rate,” Martirano said. “When more young people achieve and graduate, our entire state becomes stronger.”

Several statewide initiatives contributed to the steady increase in the graduation rate. Most notably the creation of the state’s Early Warning System, which tracks 45 different indicators – the most important being attendance, behavior and grades – to identify students at risk of dropping out. West Virginia also requires among the most high school credits to graduate in the nation, noting that the more educated our students are, the more contributions they can make to our state.

“Our educational system has a strong foundation in our early learning programs where we focus on closing the achievement gap and ensuring all students are reading on grade level by grade three,” Martirano said. “Our students are benefiting from a fully aligned system of academic standards, statewide assessments and an accountability system which all contribute to the increased graduation rate.”

The Mountain State’s graduation rate has continued to rise throughout the last several years. Data from the U.S. Department of Education placed West Virginia among the top 20 states for graduation rates in 2014-15, with a rate of 86.5 percent, up from 84.5 percent in 2013-14.

Last week, President Obama announced America’s graduation rate reached a new record high of 83.2 percent for school year 2014-15. The nation’s graduation rate, released a year behind the state release, reflects positive gains across the board for all reported groups, including students of color, low-income students, students with disabilities and English learners. West Virginia ranked fourth in graduation rate of African American students, sixth in low-socioeconomic students and 19th in special education students during the 2014-15 school year.

For additional information, contact Kristin Anderson at the West Virginia Department of Education Office of Communications at 304-558-2699 or Kristin.Anderson@k12.wv.us.