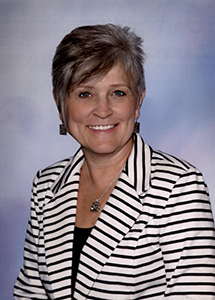 Gail Adams, the 2015 West Virginia Teacher of the Year

CHARLESTON, W.Va. — Gail Adams, an English teacher at Wheeling Park High School in Ohio County is the 2015 West Virginia Teacher of the Year. West Virginia Superintendent of Schools Michael Martirano made the announcement Wednesday night during a ceremony in Charleston that recognized each county teacher of the year. The event also honored earlier announced award winners, including the Paul J. Morris Character Educator of the Year, the West Virginia School Service Personnel Employee of the Year, the 2013-2014 Schools of Excellence and the 2014-2015 Premier Career and Technical Education Sites.

"It is my distinct privilege to honor such a fine group of educators in our state's public school system," Martirano said. "Their dedication to their students and their schools has made them deserving of these awards. I am confident that they are part of the solution as we work together to improve graduation, attendance and dropout rates."

Gail Adams is a 10-year veteran who received a Bachelor of Arts in Secondary Education from West Liberty University. As an English and Fine Arts teacher, she earned her National Board for Professional Teaching Standards (NBPTS) Certification for Adolescence through Young Adulthood in English. Gail is a member of the Ohio County Schools Staff Development Council and Professional Development Schools Mentor Team for West Liberty University Student Teachers. As the assistant coach of Wheeling Park High School’s Interscholastic Forensic League, she has helped secure seven West Virginia Interscholastic Forensic League state championships. She advocates for parent involvement and believes in educating the whole family. Though many of her students have become doctors, lawyers, and teachers, her greatest joy comes from seeing her students become happy and productive in whatever field they choose.

As West Virginia's 2015 Teacher of the Year, Adams will receive an educational technology package valued at nearly $15,000, use of a Toyota car for a year and cash awards from Highmark Blue Cross/Blue Shield and Horace Mann Insurance.

Adams was selected by a committee appointed by the state superintendent of schools to evaluate five finalists who were their county Teacher of the Year winners. Teacher of the Year, a project of the Council of Chief State School Officers, is the longest-running awards program honoring classroom teachers in the country, granting its first national award in 1952. West Virginia has participated in the program since 1964.

The Schools of Excellence are selected based on the following criteria: a rigorous and challenging curriculum; a safe and drug-free learning environment; participatory leadership; active teaching and learning; an environment that strengthens teacher skills; documented student achievement; and, the implementation of advanced and innovated programs. This year's winners are Brandywine Elementary in Pendleton County; George Washington Elementary in Putnam County; and, Maxwell Hill Elementary in Raleigh County.

The Paul J. Morris Character Educator of the Year Award is named after former West Virginia Board of Education member Paul Morris, who received the first Character Educator of the Year Award in 2003. Morris, who died in 2005, served on the state board for about 25 years. This year's recipient is Debra Meador, an educator from Independence High and Middle Schools in Raleigh County.

The West Virginia Board of Education School Service Personnel Employee of the Year Award honors one person, chosen from aides, bus drivers, cooks, custodians, maintenance workers, office workers and other school service personnel, for his or her contribution to the school and community. This year's winner is Gail Shrewsbury, a kindergarten instructional aide from Spanishburg Elementary School in Mercer County.