CHARLESTON, W.Va. — Debra Meador, a Title 1 Reading and Math teacher for both Independence High and Independence Middle Schools in Raleigh County, is the 2014 recipient of the Paul J. Morris Character Educator of the Year Award. The announcement was made Wednesday during the West Virginia Board of Education's May meeting. 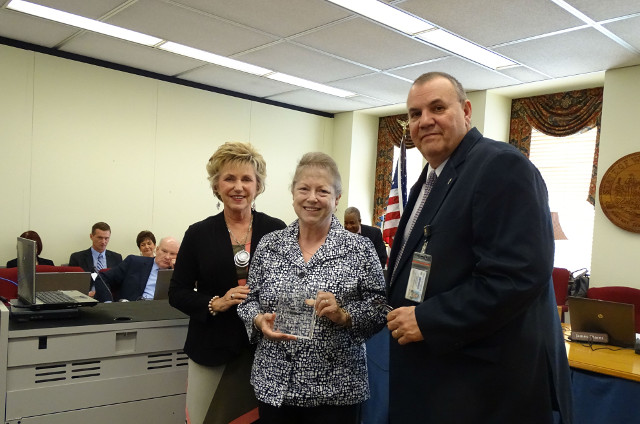 The Award is designed to recognize educators throughout West Virginia for their exemplary work in modeling and instilling character in West Virginia's students. Meador was honored for her lengthy contributions to Raleigh County Schools and by serving as a mentor, parent, friend, guardian, counselor and moral compass for the students with whom she works.

"Every day in which I interact with my students, I strive to teach character through role modeling," said Meador. "It's not what you tell them, it's what you show them by the way you conduct yourself in school as well as in the community. By working with students in this capacity, I intend to leave them with the willingness to help others without expecting something in return."

Character education emphasizes trustworthiness, respect, responsibility, caring, citizenship and fairness — traits that play important roles as children learn how to be global citizens and view the world through a moral lens. As a result of Meador's care and dedication, the students of Raleigh County have learned and displayed these fine qualities.

"Research tells us that character education can have a positive effect on student performance," said West Virginia Superintendent of Schools Jim Phares. "Students who develop strong character at an early age demonstrate responsibility for their academic performance, respect for others and respect for themselves. In today's global economy, learning responsibility and respect are as important as math and science skills."