CHARLESTON, W.Va. - Erin Sponaugle, a fifth grade teacher in Berkeley County, is the 2014 West Virginia Teacher of the Year. State Superintendent Jim Phares made the announcement Wednesday night during a ceremony in Charleston that recognized county teachers of the year. The event also honored earlier announced award winners, including the 2012 Milken Family Foundation Winner, the 2012 Paul J. Morris Character Educator of the Year, the 2013 West Virginia School Service Personnel Employee of the Year and ten 2013-2014 Schools of Excellence.

"It is my distinct privilege to honor such a fine group of educators in our state's public school system," Phares said. "Their dedication to their students and their schools has made them deserving of these awards."

Erin Sponaugle is a 10-year veteran of the teaching profession and currently works at Tomahawk Intermediate School Middle School in Berkeley County. She received a Bachelor of Arts in Elementary Education from Shepherd University and a Master of Arts in Educational Leadership from West Virginia University. As a fifth grade teacher, she earned her National Board for Professional Teaching Standards (NBPTS) Certification for Middle Childhood Generalist and continues to serve as a Candidate Support Provider for colleagues pursuing NBPTS certification. She serves as the advisor of her school's student council and school newspaper and organizes the school's social studies fair. Sponaugle was awarded the Arch Coal Teacher Achievement Award in 2013 and serves as a master mentor for new educators. She received the Honeywell Scholarship for the U.S. Space and Rocket Center Teacher Academy in 2011 and was a Transatlantic Outreach Program Fellow in 2013. Sponaugle believes that every child deserves an exceptional teacher.

As West Virginia's 2014 Teacher of the Year, Sponaugle will receive an educational technology package valued at nearly $15,000, use of a Toyota car for a year and cash awards from Highmark Blue Cross/Blue Shield and Horace Mann Insurance.

Sponaugle was selected by a committee appointed by the state superintendent of schools to evaluate four finalists who were their county Teacher of the Year winners. Teacher of the Year, a project of the Council of Chief State School Officers, is the longest-running awards program honoring classroom teachers in the country, granting its first national award in 1952. West Virginia has participated in the program since 1964.

The Milken Award provides public recognition and an unrestricted financial award of $25,000 to teachers, principals and specialists who are furthering excellence in education. This year's winner is Whitney Stead, a kindergarten teacher at the Village of Barboursville Elementary in Cabell County.

The Paul J. Morris Character Educator of the Year Award is named after former West Virginia Board of Education member Paul Morris, who received the first Character Educator of the Year Award in 2003. Morris, who died in 2005, served on the state board for about 25 years. This year’s recipient is Diana Sutherland, a teacher at the Mineral County Alternative School in Mineral County.

The 2012 West Virginia Board of Education School Service Personnel Employee of the Year Award honors one person, chosen from aides, bus drivers, cooks, custodians, maintenance workers, office workers and other school service personnel, for his or her contribution to the school and community. This year's winner is Mary Lou Hyre, a cafeteria manager and cook at Rock Cave Elementary in Upshur County. 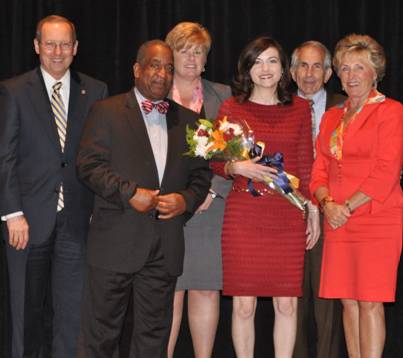