CHARLESTON, W.Va. – Gov. Joe Manchin joined Toyota Motor Manufacturing West Virginia, Inc., Mountain State Blue Cross Blue Shield, Superintendent Steve Paine and the West Virginia Board of Education on Thursday to recognize Gretchen Shaffer, West Virginia’s 2010 Teacher of the Year. Shaffer is the recipient of a car and $5,000 for being selected as the state’s top educator.

“It is my distinct privilege to honor such a fine educator in our state’s public school system,” Manchin said. “Gretchen’s dedication to her students and to incorporating 21st century learning skills into her classroom is evident every day. She is innovative and dynamic in the classroom and instills in her students a true love for learning.”

Paine added, “The teaching profession makes all other professions possible. West Virginia has some of the best educators in the nation. Gretchen is a shining example of the talent in our classrooms and I am proud of all she does for her students.”

Each year Toyota donates a new car to the state teacher of the year for use during his or her tenure. This year, Shaffer, a math teacher at Morgantown High School in Monongalia County, will receive a Prius. 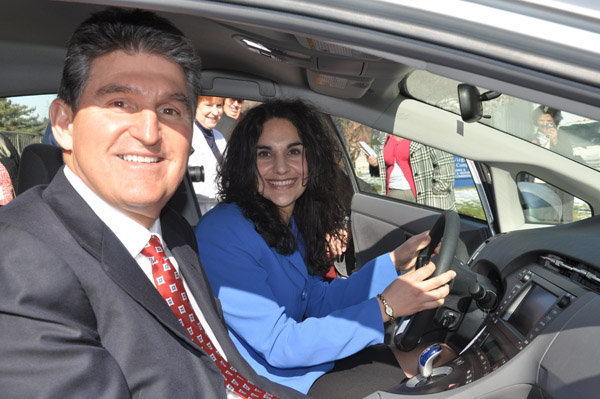 “Teaching is a profession worthy of our utmost respect and we appreciate this opportunity to honor teachers who exemplify innovation and knowledge and show genuine interest in the lives and success of their students,” said Mike Lutz, general manager administration, Toyota, West Virginia. “As a corporation, Toyota, West Virginia is striving to acknowledge and reward leading educators who are preparing the next generation of leaders who will help support our long-term success.  On behalf of Toyota and the 1,000 outstanding Team Members at our Buffalo manufacturing facility, it is with great pleasure that we recognize the 2010 Teacher of the Year – Gretchen Shaffer.”

As West Virginia’s Teacher of the Year, Gretchen also received $5,000 from Mountain State Blue Cross Blue Shield and an educational technology package from the Smarter Kids Foundation valued at approximately $14,300.

“We are always pleased to be able to assist in rewarding our state’s teachers who exemplify the outstanding qualifications and dedication to students that Ms. Shaffer has possessed over the past few years,” said Mountain State President Fred Earley. “She is truly a role model for our children.”

Shaffer earned her National Board Teaching Certification in Adolescent and Young Adulthood Mathematics in 2008. She received the Arch Coal Teacher Achievement Award in 2009 and is one of West Virginia’s model teachers in algebra and geometry. She also created an afterschool ACT/SAT prep class that has helped many students increase their scores enough to qualify for the PROMISE Scholarship. She also was chosen to participate in the West Virginia Department of Education’s Teacher Leadership Institute in 2007 and has written Problem Based Learning units that are included in the department’s Teach21 Web site. She is sponsor of Morgantown High School’s Student Council.

Shaffer considers her greatest accomplishment to be her desire for and ability to build relationships with all of her students. She began her teaching career in 2002 in Maryland before moving to Morgantown High School in 2005. She has a master’s degree in education from Frostburg State University and a bachelor degree in speech pathology and audiology from West Virginia University, where she was awarded the Order of Augusta medal, given to the top eight graduation seniors. She also was named one of 30 outstanding seniors by the WVU Foundation.

Shaffer was selected by a committee appointed by the state superintendent of schools to evaluate nine finalists who were their county Teacher of the Year winners.

Teacher of the Year, a project of the Council of Chief State School Officers, is the longest, ongoing awards program honoring classroom teachers in the country, granting its first national award in 1952. West Virginia has participated in the program since 1964.

For more information about the Teacher of the Year award, contact the West Virginia Department of Education’s Office of Communications at 304-558-2699.