CHARLESTON, W.Va. – The West Virginia Board of Education welcomed its newest member this week as high tech entrepreneur Wade Linger took the oath of office. 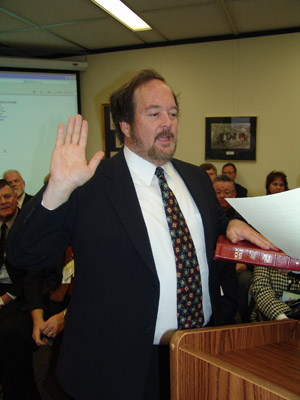 Linger, a Charleston native and current Marion County resident, was appointed to the West Virginia Board of Education by Gov. Joe Manchin and took his oath from Superintendent of Schools Steve Paine on Wednesday. He will serve a nine-year term ending in 2017.

“I am honored to serve the children of West Virginia,” Linger said. “I accept this appointment with reverence for the important work that lies ahead; mindful of the challenges we face in preparing our children to succeed in today’s global economy.”

Trained as a computer programmer while serving in the U.S. Air Force, Linger has spent much of his professional career in the fields of technology and research, including a stint as the first vice president of research for the West Virginia High Technology Consortium.

After serving in the Air Force, Linger began working as a defense contractor for ManTech International Corp., where he wrote and maintained computer software used by the U.S. Navy to track aircraft maintenance and parts and pilot flight hours. He established TMC Technologies and the technology consulting business, Linger Enterprises. He also created a restoration shop known as Wade’s Garage.