CHARLESTON, W.Va. – More than 200 West Virginia eighth graders on Friday, became the latest recipients of the prestigious Golden Horseshoe Award given for outstanding knowledge of West Virginia history and culture. 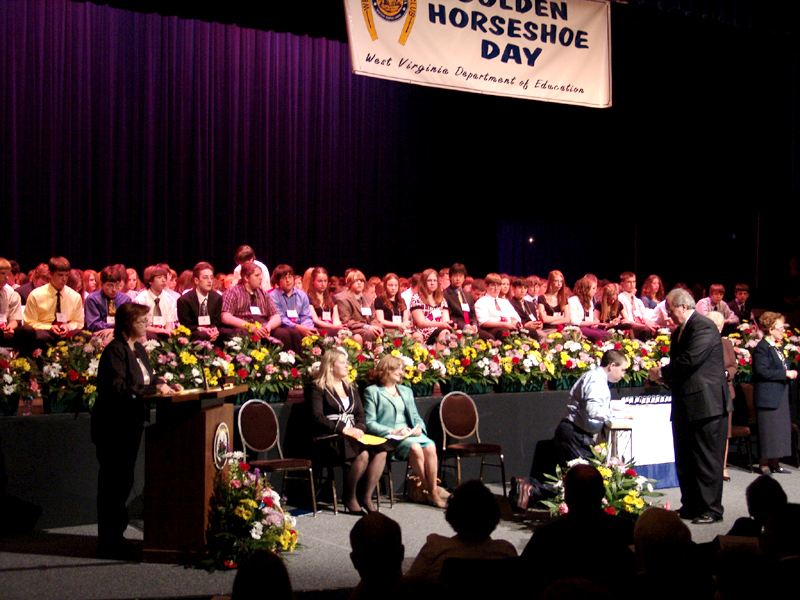 State Superintendent Dr. Steven Paine inducted the students from all 55 counties as Knights and Ladies of the Golden Horseshoe Society during a pinning ceremony at the Cultural Center in Charleston.

“This award is coveted by many in the state, but received by very few,” Paine said. “It is an honor that rewards students’ appreciation for and understanding of West Virginia and its people.”

The Golden Horseshoe Test has been administered in West Virginia each year since 1931 and is the longest running program of its kind in the United States. The top-scoring students in each county receive the prestigious award. Each county has at least two winners. The exam tests student knowledge on citizenship, civics and government, economics, geography, history and current events.

The Golden Horseshoe originated in the early 1700s in Virginia when then-Governor Alexander Spotswood saw the need for exploration of the land west of the Allegheny Mountains, most of which is now West Virginia.

“The governor organized a party of about 50 men to explore the frontier,” said West Virginia Department of Education Social Studies Coordinator Regina Scotchie. “At the end of the exploration, he presented each member of the party with a golden horseshoe.”