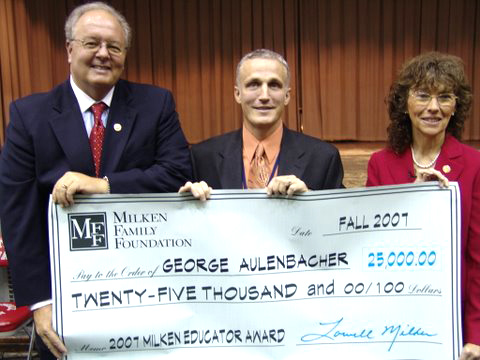 The award, which provides public recognition and an unrestricted financial award of $25,000 to teachers, principals and specialists who are furthering excellence in education, alternates each year between elementary and secondary educators. New recipients are taken completely by surprise during schoolwide assemblies overflowing with proud students, colleagues, and an entourage of distinguished officials and media. In a moment’s time, these unsung heroes gain celebrity status and, as one of last year’s awestruck recipients said, “I feel like I’ve won an Academy Award and the lottery!”

“Teachers have the most important jobs in ,” said Chairman and Co-Founder Lowell Milken. “We entrust them with the enormous responsibility of preparing our young people with the skills, knowledge and experiences needed to be successful in a most challenging 21st century. The Milken Educator Awards say, in a very public way, that greatness in education must be recognized and rewarded.”

Aulenbacher has been in the education field for nearly a decade. Colleagues at Stonewall Jackson Middle School describe Aulenbacher as a natural born leader with enhanced communication and people skills. Since his time at Stonewall Jackson, individual student achievement levels have risen and a sense of school pride has developed.

Research has shown that the single most important school-based factor driving student performance is the quality of the teacher in the classroom. The most effective teachers produce as much as five times the learning gains of the least effective teachers.

Including this year’s selections, since its inception, the Milken Educator Awards have recognized more than 2,300 educators with over $58 million. The 2007 recipients will receive their $25,000 checks during the Milken National Education Conference held in next spring. Before an audience of national business, government and education leaders, the newest Milken educators will be honored at a gala awards ceremony so spectacular that it has been dubbed by Teacher magazine as “the Oscars of teaching.”

The award winners also will join the Milken Educator Network, a group of more than 2,300 distinguished educators, whose expertise serves as a valuable resource to fellow educators, legislators, school boards and others shaping the future of education.

Unlike most teaching awards, the Milken Educator Awards have no formal nomination or application process.  Educators are recommended for this prestigious honor without their knowledge by a blue-ribbon panel appointed by each state’s department of education.

Candidates for the Milken Educator Awards are selected on the basis of the following criteria:

·       Exceptional educational talent as evidenced by effective instructional practices and student learning results in the classroom and school;

·       Exemplary educational accomplishments beyond the classroom that provide models of excellence for the profession;

·       Strong long-range potential for professional and policy leadership; and

·       Engaging and inspiring presence that motivates and impacts students, colleagues and the community.

For more information about the Milken Educator Awards and the surprise notification, contact Communications Director Liza Cordeiro at (304) 558-2699.

has been an education reform leader for more than two decades.  In addition to creating the Milken Educator Awards to recognize teacher talent, he established the Teacher Advancement Program (TAP)™ as a complementary initiative to develop more highly effective teachers through comprehensive, research-based reform.  TAP has expanded to more than 180 campuses since its launch in 1999, impacting more than 60,000 students and 5,000 teachers. In 2005, established the National Institute for Excellence in Teaching, an independent public charity, to operate TAP and the with the goal of a quality teacher for every classroom in .