Student Representative to Join the W.Va. Board of Education

Elections are the lifeblood of any democracy. We saw recently in Kanawha County just how important every vote is. When votes were tallied Aug. 11, supporters of table games came out on top by just 33 votes. After the canvass, the referendum passed by 343 votes. The outcome is still unfolding. Whether you agree or disagree with the issue, I want to applaud the thousands of citizens who exercised their right to vote at a time when we frequently read about low voter turnout across the nation.

Regrettably, research shows that only about 30 percent of young people between the ages 18 to 24 consistently vote. While voting rates increase with age, if young adults are not engaged, there's a danger that their apathy will become ingrained.

I am troubled that many young people today simply do not have an adequate understanding of how our government and political system work. Consequently, they are not well prepared to participate as citizens.

This country has long exemplified democratic practice to the rest of the world. With the attention we are paying to advancing democracy abroad, we ought not neglect it at home.

Two-thirds of high school seniors scored below proficient on the national civics assessment in 1998, and only 9 percent could list two ways a democracy benefits from citizen participation. Young people remain highly patriotic, and many volunteer in their communities, but most are largely disconnected from current events and issues.

I believe that a healthy democracy depends on the participation of citizens and that participation must be learned. As the 2003 report "The Civic Mission of Schools" noted: "Individuals do not automatically become free and responsible citizens, but must be educated for citizenship."

That means civic learning needs to be taught along with other academic subjects. This is one reason that the West Virginia Board of Education is moving forward with plans to expand a pilot program that adds a student representative to the state Board of Education in an effort to promote civic awareness and garner student input. 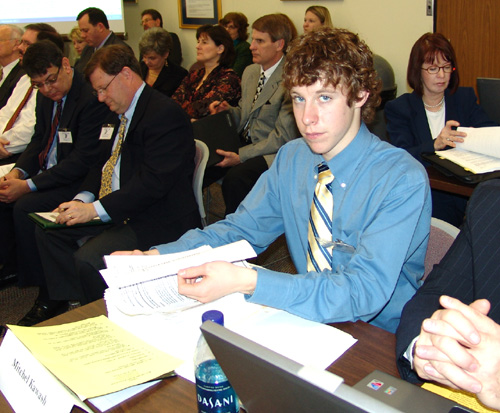 Michael Kawash, a student at George Washington High School in Charleston, served as the first nonvoting student member during the board’s meeting in March. I believe, as do many other board members, that adding a student to the board will give us a young person’s perspective that has been missing.

As a long-time proponent of civics education, I believe this program will give high schoolers the opportunity to see government in action. Civics is so important to a well-rounded education in a Democratic society. Having student representatives on the West Virginia Board of Education will not only expose them to how government works but also will provide us with a young voice on how our decisions affect students. Research shows students who are involved when they are young are more involved in their community as adults.

West Virginia is among only a few states that require students to take civics to graduate. Although civics courses have long been offered as electives, they are now required by all beginning with the Class of 2008. Civics also is a component of our 21st Century Learning initiative to prepare today’s students for their tomorrow instead of our past.

The student representative project will allow a different student to attend board meetings each month for three months beginning in September. They will be chosen from among participants in West Virginia Student Council Association, West Virginia Youth in Government Program of the HiY or the U.S.  Senate Youth Program, which is sponsored by the William Randolph Hearst Foundation. During the summer months, the participating student could be in college and pursuing an education degree.

When the board meets outside of Charleston, a student from the county where the board is meeting will be the representative that month. That student will be chosen by the county.

Those interested must be juniors or seniors in good standing at a West Virginia public secondary school and submit a curriculum vitae, which includes a summary of educational and academic backgrounds as well as school activities, community services, presentations, awards, honors, affiliations, participation in civic activities and other details. Participants also must provide parental or guardian permission and provide feedback to the board after completing their term.

Preserving our democracy should be reason enough to promote civic learning. But there are other benefits. Understanding society and how we relate to each other fosters the attitudes essential for success in college, work and communities. It also enhances student learning in other subjects.

Our first public schools saw civics education as a core part of their mission. More than 80 years ago, John Dewey said, "Democracy needs to be reborn in every generation and education is its midwife."

This student project is but one way  we at the state board are doing our part for our communities, our state and our country to prepare students for their role as citizens.

It is my hope that by adding a student representative to the state board, we will serve as a model for other states as well as our own county boards of education. It will be a good day when we can look around our state and the nation and see young people actively involved in government.