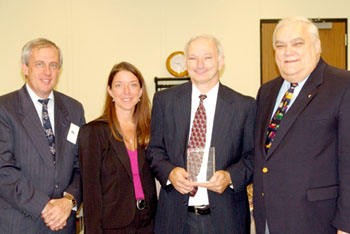 In its third year, the award is presented annually by the State Board to recognize educators who demonstrate the six pillars of good character: Respect, Responsibility, Trustworthiness, Fairness, Good Citizenship and Caring Attitude. Last year’s recipient was David R. Book, retired principal at Liberty High School.

“Character Education has become such an important part of our children’s education,” said State Schools Superintendent Steve Paine. “Mr. Miller not only teaches the six pillars, but lives them everyday and instills their lessons in the students of Roane County.”

Early in Miller’s teaching career, he realized that students required adult guidance and encouragement. While teaching in the classroom for 17 years, he stayed committed to teaching students about the six pillars of good character

His commitment to Character Education became even stronger when he was promoted to assistant principal. He developed inspirational weekly assembly programs for Walton High School’s “Responsible Students Program,” which communicated messages about the pillars of good character.

As principal, character education became his platform. He established a warm, caring environment where all would take pride in themselves and their school community. Students embraced his initiative and, in return, the school soared from “last place” to “first place” with county achievement. His highest honor was when he was asked by the final graduating class of Walton High School to be its commencement speaker.